16 February 2016
Sydney Anti-Discrimination Activist Garry Burns has taken legal action under the Anti-Discrimination Act 1977 ( NSW ) against La Trobe City Councillor Christine Sindt over her publishing to her FaceBook page a statement that Mr.Burns is a “ gay child sex normalisation activist “ and other material suggesting homosexuals in general are criminals because they molest children.
Ms.Sindt allegedly made a complaint to Morwell Police on or about the 14 July 2015 that Mr.Burns had attempted to “blackmail” her into giving him money in exchange for him dropping his court proceedings against her.
“ I have not been contacted by Victoria’s Police Force in relation to any allegation of criminality and I believe Councillor Sindt is using Morwell Police in attempt to discredit or intimidate me and via third parties like Cahill. In the YouTube clip below from a Tom Cahill has been in contact with Sindt because he has put in email that I am an accused person in relation to my illegitimate dealings with Councillor Sindt ” in relation to blackmailing her” , said Mr.Burns.
The YouTube clip below also suggests that Mr.Burns is a pedophile and that homosexual men and women are pedophiles / criminals.
Mr.Burns has written to Minister of Police Mr.Wade Noonan , Minister for Local Government Ms. Natalie Hutchins , Chief Commissioner of Police Mr.Ashton and Premier Daniel Andrews but all seem to condone the pernicious practice of it’s Police Force; i.e , one of allowing a serious crime to hang over an innocent man’s head while others like Sindt use that allegation to incite third parties to hatred and violence against homosexuals while being condoned by those of the powerful position of the Victorian Labor Government.
‘ I suggest all those inept and incongruous politicians cc’d in above who’ve received a copy of this press release to order popcorn and cup cakes and sit back and listen to this YouTube clips perverted ramblings of hatred against me personally and toward fellow homosexual Australians” , said Mr.Burns.
Mr.Burns believes Victoria Police once they’ve received an allegation against a person alleging serious criminality they must investigate that allegation promptly so that they can either charge the person or dismiss the allegation as unfounded.
ENDS
MEDIA ENQUIRIES
Garry Burns
02-9363-0372
0407-910- 309.
garryburnsantidiscriminationactivist.com 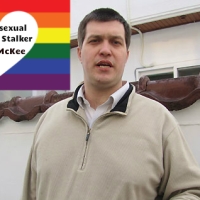