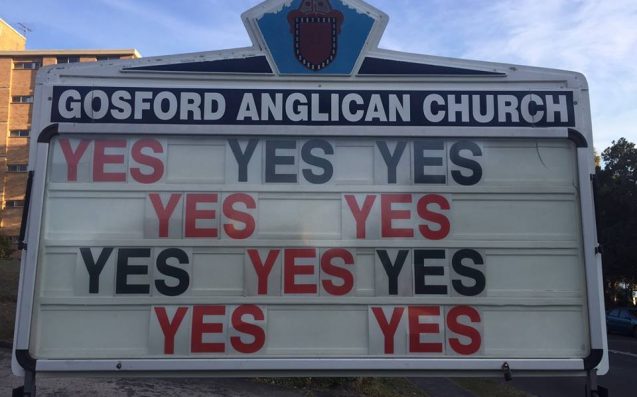 According to Bower, before last night’s 6 o’clock mass, 200,000 people had read the above post, while by Sunday morning that number had gone up to three quarters of a billion.

The Facebook page updated their profile photo yesterday to Australian Marriage Equality‘s rainbow Australia logo. They also updated their cover photo to a picture from the Republic of Ireland‘s Yes Equality campaign, which saw the notoriously religious nation vote ‘Yes’ in a referendum on same-sex marriage in 2015.

Gosford Anglican Church posted a pro-marriage equality billboard on Monday as the LNPmet to discuss the issue, and another on Friday, which pushed congregants to register with the Australian Electoral Commission.

In that post, Bower says that while he is opposed to the plebiscite, he will participate and vote yes. He also points to the unintended consequences of the huge amount of extra people now registered to vote – “several hundred thousand millennials start[ing] to participate in the political process“.

In Bower’s sermon today, he tried to extrapolate the dynamics of the same-sex marriage debate already unfolding in this country by talking about people who fit neatly into mainstream society as ‘on a boat’, while those on the fringes in marginalised communities are outside of that boat.

He used that metaphor to talk about people being disrespectful of other’s views on social media, and the opportunity presented by – whodathunkit? – actually listening to each other.

It will be a conversation between people who are firmly in the boat, and people who have always been tossed around, on the margins, outside the boat in the storm.

No matter whether we agree with marriage equality or whether we think marriage is between a man and a woman, we oughta be able to be in our boat, but we need to be able to hear the cries of those who are being tossed around on the waves.

There is an insistent call to grow, to develop, to get out of the boat. When we get out of that boat and start engaging with people who may be different to us – who may have different views, who may have a different idea about what that boat should be like – when we start getting our feet wet, we’ll all of a sudden discover that we have begun to climb the mountain.